Corporate Governance: ‘Loss of Consumer Trust’, a Risk to Monitor? 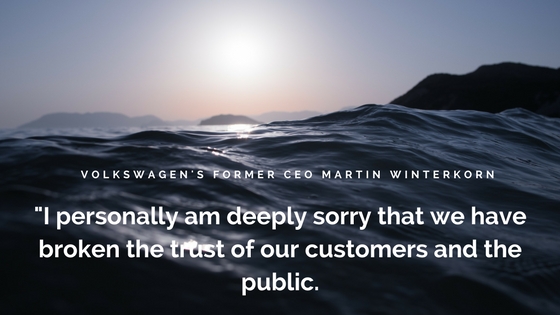 The Nigerian Bottling Company (NBC) has recently come under fire on the safety of its products for consumption by the public or its product content warning practices. This sort of scandal for lack of compliance (or a perceived lack of compliance, in NBC’s case) is not new. Volkswagen (VW) is still dealing with the aftermath of its ’emissionsgate’ (a clear case of compliance-tinkering) and Wells Fargo (a US Financial Services company) is currently dealing with its scandal for bank accounts and credit cards opened or applied for without customers’ knowledge or permission between 2011 and 2015.

The common thread for these scandals (that has taken place in three different continents) is a the resulting erosion of consumer trust when a whiff of a scandal breaks out, especially on the perceived safety of products, and the far-reaching consequences for their industries. A poll taken after the VW scandal erupted in 2015 showed that VW was the worst-perceived car brand in the UK.

Consumer Trust for any product or service company is fundamentally important and has a direct impact on its shareholder and employee value, so it needs to be considered on the risk-management agenda of the board and the potential loss of it should be monitored as the company would, for any other risk.

Since the news broke out on the court judgement in the case of Fijabi Adebo Holdings Limited and Dr. Emmanuel Fijabi Adebo v. NBC and NAFDAC, the negative perception of the safety of the drinks, for consumption, has overtaken any positive emotions that may have been connected with the drinks and we have started to see the publicity management move into overdrive to manage the effects of the scandal. However, it remains to be seen how the board of NBC will rise up to turn-around or overcome the scandal (VW had to appoint a director for integrity and legal affairs to its board in the interest of future good governance).

As the impact of these scandals unfold for these companies, it is worth noting that the Board is ultimately responsible for ensuring that the company complies with all regulatory standards applicable in its domicile of business, and any other jurisdictions connected to its products and services. So the Board should ensure that it is supplied with up-to-date and timely information or reporting required to meet its statutory duties. There is no defence of ignorance for the board of any company when ‘all hell breaks loose’. A Volkswagen board member told the BBC, after the news broke out that “……the board only found out about the problems “shortly before the media did”, and expressed concerns over “why the board wasn’t informed earlier about the problems when they were known about over …”.

A lack of risk monitoring could result in lawsuits for breach of contract, fraudulent concealment, false advertising, and violations of laws. Volkswagen AG has now been sued in Germany for allegedly failing to inform financial markets in a timely manner about defeat devices used in diesel engines. The suit on behalf of 278 institutional investors seeks compensation.

A lack of risk monitoring could result in fallen stock value. In November 2015, Moody’s Investors Service downgraded VW’s bond credit rating from A2 to A3. Fitch Ratings downgraded Volkswagen’s Long-term Issuer Default Rating by two notches to BBB+, with a negative outlook.

Most of all, a lack of risk monitoring could result in diminishing customer base (loss of consumer trust) causing it to fail, and it may never recover from this.

We have a training course in the works which we think will be of benefit to company secretaries, directors, executive management teams, and senior managers. If you would like to be kept informed on our upcoming Effective Board Reporting course, you can express your interest here and we will keep you updated with the details.

You can subscribe here to receive our blog posts straight to your inbox.